The Russia-Ukraine Crisis and Market Volatility In Perspective

In a speech on February 23, 2022, Russian President Vladimir Putin announced that a “special military operation” would begin in Ukraine. Russian military forces attacked a broad range of targets across Ukraine last night while Russian President Putin vowed to replace Ukraine’s government. Many are worried that Russia’s aggressive stance and wide-scale military attack could potentially spiral into the largest European military conflict since the Cold War.

How Did We Get Here?

When the Soviet Union broke up in the early 1990s, Ukraine, once a cornerstone of the former Soviet republic, was the third-largest nuclear power in the world. Ukraine eventually made the decision to denuclearize, and in a series of diplomatic agreements, Ukraine gave its nuclear arms back to Russia. In exchange, Ukraine was provided with security assurances that protected the country from Russian attack.

These assurances were tested in 2014, when Russia illegally annexed the Ukrainian territory of Crimea. Though relations between the two countries have been strained since, tensions escalated in early 2021 when Ukrainian President Volodymyr Zelenskyy pressed President Biden to let Ukraine join NATO.

Putin sees NATO’s expansion eastward as an “existential threat” and has demanded a legal guarantee that NATO will not hold any military activity in eastern Europe and Ukraine. Last spring, he began sending troops near the Ukraine border for “training exercises” and has steadily increased Russia’s military presence near the border.

Despite diplomatic efforts to diffuse the situation, Russia invaded its ex-Soviet neighbor Thursday morning, days after Putin announced that Moscow would officially recognize two Russian separatist regions in eastern Ukraine, Donetsk and Luhansk. This move prompted Germany to halt certification of Nord Stream 2, one of two pipelines that Russia has laid underwater in the Baltic Sea. These pipelines are in addition to Russia’s land-based pipeline network that runs through eastern Europe, including Ukraine.

Many believe Putin is using Nord Stream 2 as a tool to weaken Ukraine and make the EU more dependent on Russian natural gas. If certified, Nord Stream 2 would likely send pipelines across Ukraine offline, depriving Ukraine of approximately $2 billion in transit fees from Russia and undermining any previously perceived protection from Russian military action.

The price of oil spiked to a seven-year high following Russia’s invasion of Ukraine, as it remains unclear what the near- and longer-term impact of the certification delay and a possible Russia

retaliation will be on Europe’s economy. Almost 38% of the natural gas used by the European Union last year was imported from Russia, according to Eurostat. Meanwhile, government figures say Russian natural gas accounted for nearly 27% of the energy consumed by Germany.

The Crisis’s Effect on U.S. Stocks

U.S. stocks fell sharply Thursday morning. The Dow Jones Industrial Average fell 859 points during the day, and the Nasdaq opened in bear market territory, down over 20% since peaking in November. In addition, the S&P 500 Index has declined just over 11% year-to- date, placing it squarely in correction territory. (As a reminder, a correction is generally defined as a market decline of more than 10%, while a decline of 20% or more is considered a bear market.) At the close Thursday, the S&P 500 closed up 63.20 and Dow Jones Industrial Average finished the day up 92.07.

It’s not unusual for geopolitical and other external events to shock financial markets. Yet historically, stock volatility has been short-lived following such events. In fact, since World War II, stocks were higher three months after a geopolitical shock. And following about two-thirds of those events, they were higher after only one month. The chart below helps illustrate this point. 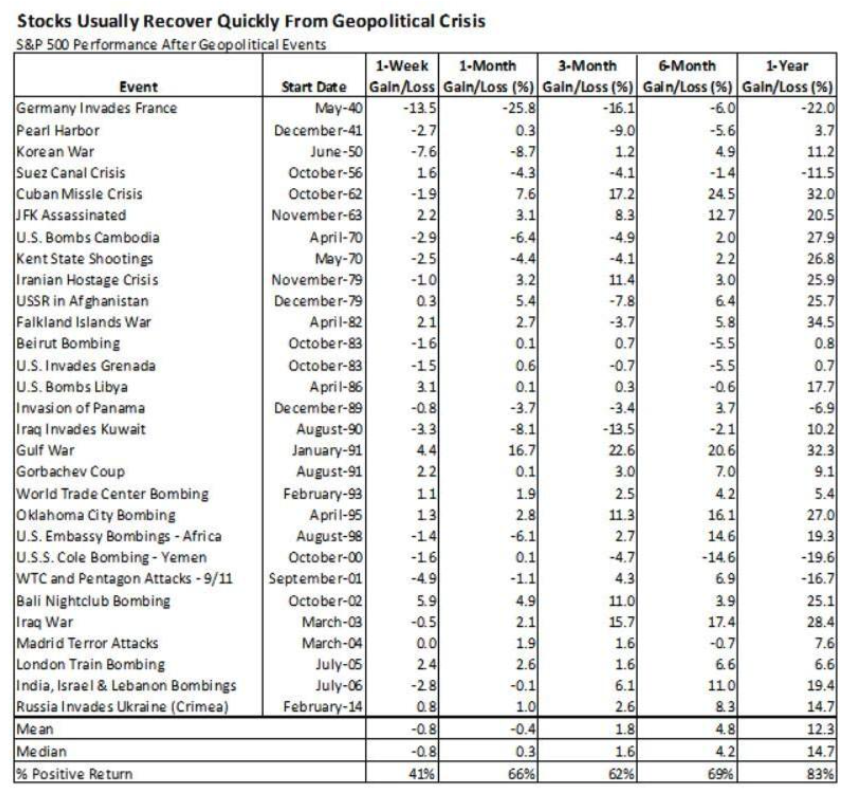 Source: What history says about geopolitics and the market

What Does This Mean for Long-Term Investors?

While volatility is always unsettling, it’s not usual given the many uncertainties this conflict creates. While we don’t know how this will play out, nor do we know how long it will last, we are likely to see more volatility in the near-term. However, there are a few aspects of the current situation that may help ease your anxiety.

In general, we don’t believe external events like the Russia-Ukraine crisis warrant dramatic changes to your long-term investment plan. Historically, investors who stay the course during periods of uncertainty are ultimately rewarded, and we have no reason to believe this time will be different. As today’s wild swings show, trying to predict markets is a fool’s errand. History has shown that investors, who remain prudently invested throughout corrections, have witnessed attractive returns.

We’ll be monitoring the situation closely and will keep you updated as appropriate. As always, we’re here to support you if you have any questions or want to discuss your financial plan in more detail.

Richard W. Stout III is managing director of Benchmark Wealth Management, LLC, with 25 years of experience in the financial industry. He specializes in financial planning and asset management for individuals, families, and institutions seeking to build and monitor durable and sustainable plans for their financial futures. Rick is a Certified Financial Planner™ professional and holds the Accredited Investment Fiduciary® (AIF®) designation. He obtained his MBA from Rensselaer Polytechnic Institute and his BA in Economics and Anthropology from the University of Connecticut. He has earned a Master of Science degree in Personal Financial Planning from the College for Financial Planning. He has extensive background experience in lending, credit review and analysis, and real estate and partnership management. Learn more about Rick by connecting with him on LinkedIn.

Thomas J. Britt is managing director of Benchmark Wealth Management, LLC, with 20 years of experience in the financial industry. He specializes in executive financial planning, retirement planning, investing, as well as the management of trusts and endowments. Thomas is a CERTIFIED FINANCIAL PLANNER™ professional and holds the Master Planner Advanced StudiesSM, MPAS®, Certified Investment Management Analyst® (CIMA®), and Chartered Retirement Planning Counselor℠, CRPC® designations. He earned a Bachelor of Science in Finance from the University of New Haven, an MBA in financial technology from Rensselaer Polytechnic Institute, and a Master of Science in Personal Financial Planning from the College for Financial Planning. He is also a proud veteran of the United States Navy Submarine Force. Learn more about Tom by connecting with him on LinkedIn.

Additional information, including management fees and expenses, is provided on our Form ADV Part 2, available upon request or at the SEC’s Investment Advisor Public Disclosure site, www.adviserinfo.sec.gov/firm/160192 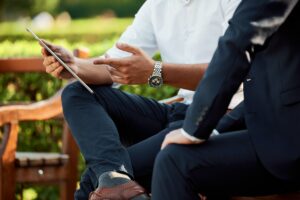 The True Value of Financial Advice 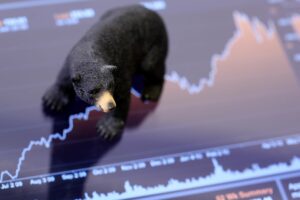 5 Tips for Surviving a Bear Market 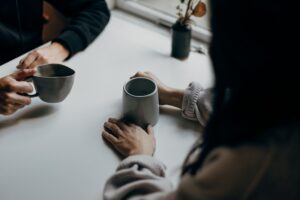 How to Set and Maintain Healthy Money Boundaries